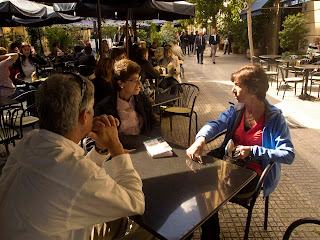 Our first lunch in Sicily at Spinnato
Pasticceria 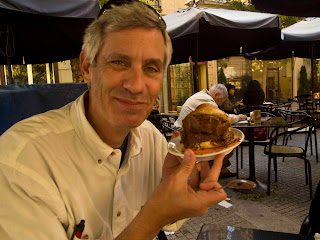 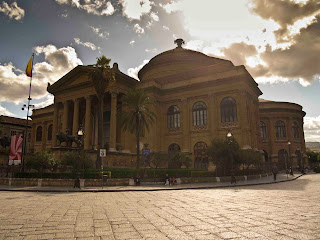 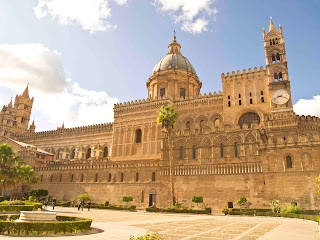 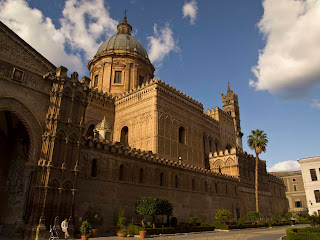 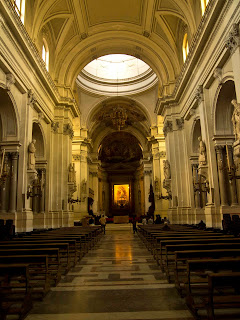 Interior of the Cathedral 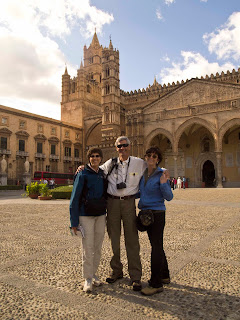 Jeri, Dave, and Molly outside the Cathedral 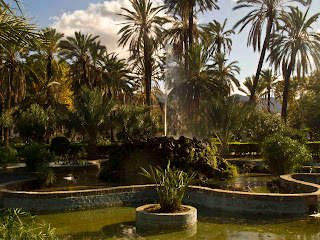 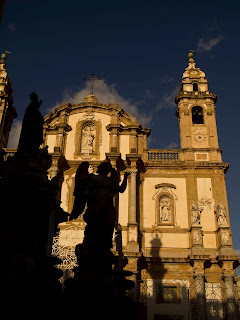 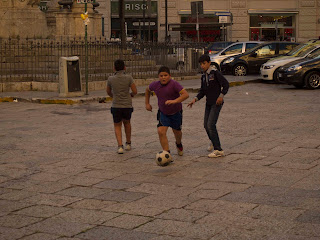 Soccer in the Piazza San Domenico 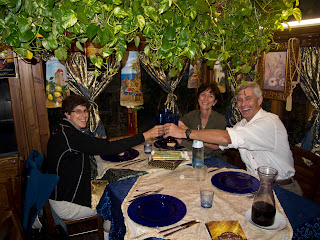 Our arrival today in Palermo was pretty much uneventful. Our flight to Rome was on time and smooth and the short trip (less than an hour) to Palermo, Sicily was a snap. The Rome airport was a bit tricky to get from the international arrivals, through security again, and finally to a terminal on the opposite side of Italy that sent planes to various Italian cities. We hustled, but still had time to spare.

Upon arrival, a young Italian (at least we think he was Italian, his only communication was a series of prego’s and grunts) met us with a “Mr. Cohen” sign and then began our introduction to Sicilian driving habits. Within the first five minutes of driving with Vincenti (I just made that up, he never did give us his name), I counted no less than 10 motor vehicle violations from speeding (120kph in a70kph zone) to changing lanes without a signal. The ride was 30min, but seemed like an hour. By the time we reached the hotel, we were ready for a glass of wine (or something stronger). I was very thankful that I had elected not to drive us around the island. I would have certainly returned gray if iable to return at all.

Molly and Dave arrived about an hour after us, giving us just enough time to shower and change clothes, and for me to fall asleep on the bed. Jeri woke me and the four of us left the hotel in search of sustenance. Just around the corner, we found a bar, with al fresco dining and ordered a light lunch. For dessert, we had brioche con gelato, a Sicilian favorite, brioche stuffed with gelato (pistachio for me and chocolate for Dave).

We spent the rest of the afternoon walking all over Palermo in hopes that we might stay awake long enough to be able to sleep tonight and reset our clocks. We walked to the cathedral, an ornate cathedral that imparts the flavor of Sicily, an island that has seen many conquerors, the Phoenecians, Greeks, Romans, Arabs, Norsemen, Normans . Evidence of nearly all of these cultures can be seen in the architecture of the Cathedral.

By six we were walking zombies and decided to eat once more before we retired for the evening. We found a great little family owned and run (Angelo, the patriarch came out and took our order , while his wife and son worked in the kitchen). Dinner was great, pasta, gnocchis, veal, and the ending included a fantastic cannoli and tiramisu, both of which are Sicilian in origin.

I’ve downloaded my pix from today and fell asleep while doing this, so I will wait to upload my first entry until tomorrow morning. We begin our trip in earnest at 8:30 AM