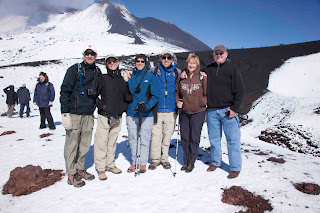 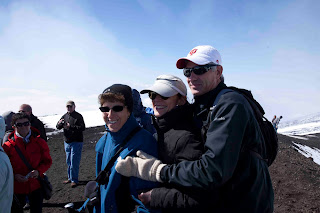 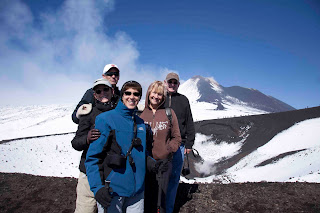 Dave, Molly, Jeri, Jeanne and Michael at the crater rim 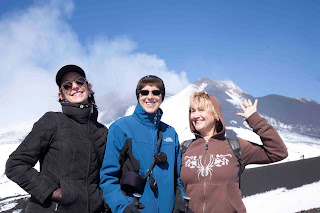 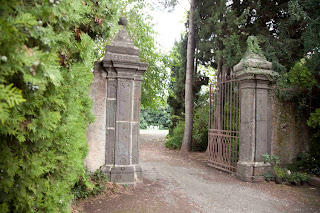 Entrance to the "Godfather Mansion" home of Franco Platania 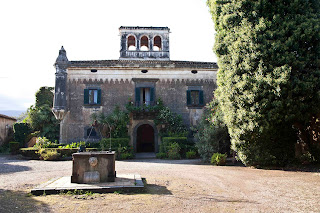 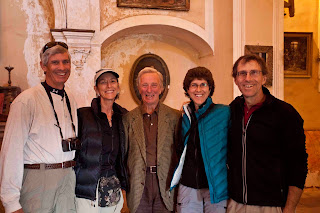 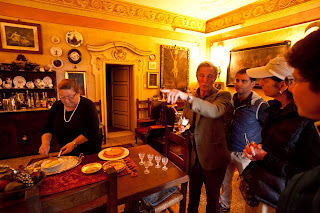 Wine and sweets with the Platanias 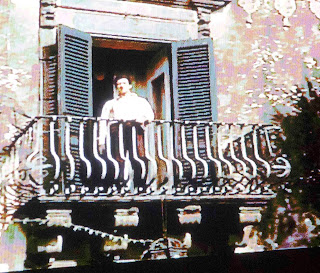 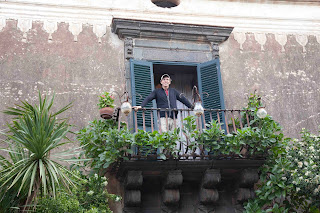 
Today was gorgeous. We met Paolo at 9:30 after a leisurely breakfast with plans to go sightseeing, but as we began to head out of Taormina, we spotted Mount Etna, with not a cloud nearby. We made a quick decision to change our plans once again, and try for some hiking on Mount Etna. As we drove closer to the mountain, clouds began moving in, and by the time we were at 2,000 meters, we were again completely socked in. The fast way up was a cable car then jeep, so we elected to do this then walk at the 2,500 meter mark to the top. We stopped for a bathroom break before going up, and as I came out of the bathroom a woman was pointing at me. It took a few seconds to realize that it was Jeanne Shafer. Jeanne and Michael were going to meet us tomorrow for a puppet show and dinner in Siracusa, but we just happened to all decide to come to Mount Etna today. Dave and Molly and Michael and Jeanne got to meet a day early.

The fog that we left the 2,000 meter level in dissipated fairly quickly giving us spectacular views of the main cone that is still active (last eruption was October 8, 2011, only a week ago). Escaping gas can clearly be seen. We hiked around an adjacent crater that was formed by a lateral eruption from the southeastern cone. Steam (rather than sulfur dioxide)continues to pour out of this crater and the surrounding cinder is warm to the touch. Even with all this thermal activity, there was still a fair amount of snow in this area. Though the sky was clear, there was a stiff wind blowing with wind chill probably 10-20 degrees Farenheit. Molly and Jeri were well layered (Jeanne was in a sweatshirt-don’t know how she did not freeze to death), but the cold wind was too much for the Florida girl- she really needed Antarctica gear. She was a trooper, though, and before she turned into a popsicle, we began to make our descent. At the bottom, we said goodbye to Jeanne and Michael with plans to meet tomorrow evening in Siracusa.

Our next stop was the town of Zafferana Etnea, home to Sicily’s honey production. We stopped at a honey factory that also sold olive oils and wine. After sampling about a dozen olive oils, 8 or so different honeys, some olives and olive products and 5 wines, we decided we did not need lunch today. We had a sampling of their products shipped home (we never would have made the weight limit for suitcases if we carried this). Nero D’Avolo is a delicious red wine from this region, and there were two dessert wines, Malvasia (a type of sherry) and an almond wine (can’t remember the name) that were great.

The last stop on our journey today we all though was going to be really lame, a visit to the home of Michael Corleone from the Godfather movies. This turned out to be one of the highlights of our trip so far. The home is actually the estate of Franco Platania, and has been in the family for about 400years. What we did not realize was this tour was very private and given by Signori Plantania himself. As we entered the gates of the estate, Signori Plantania met us in the courtyard. We is a charming older gentleman who was very excited to have us there and loved my interest in photos. He kept dragging me to various locations for the best shots, grabbed my camera and began posing us for different scenes from the Godfather. I’m surprised he didn’t try to have Jeri sit in his car while it blew up (Godfather I- Michael’s car blows up with Appolonia, his new bride, in it.). He had me stand in the spots that Al Pacino stood on the steps and in the balcony, and we recreated the escape of the bodyguard who set up Michael. We then got a tour of the inside of his home, and his wife served us Malvasia, cake, and espresso. While we ate in his parlor, we watched segments of the Godfather movies that were filmed here. Before we left, he showed us one of his outbuildings that housed a variety of photographs taken during filming on location. We could not believe that we had been entertained by this couple for well over two hours. We kissed (2 cheek European) him and his wife goodbye and began our trip back to Taormina.

Tomorrow we have to drag our luggage downstairs. At least we will have gravity working for us.