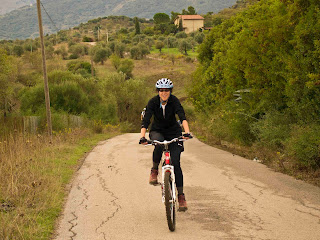 Jeri cycling in the hills around Castelbuono 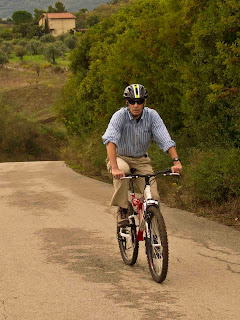 Dave's bike was a bit too small 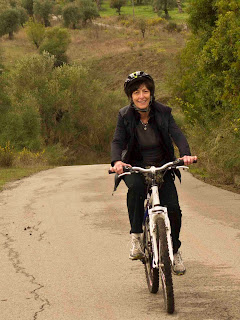 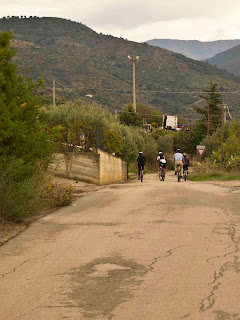 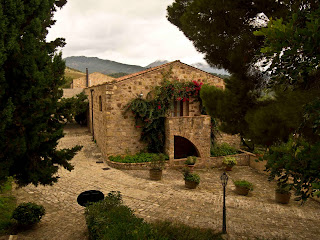 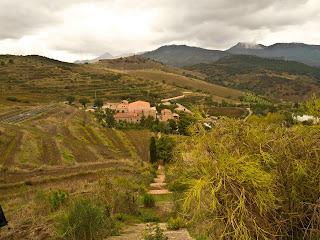 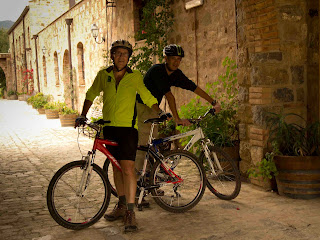 Craig and Dave after the ride from Hell 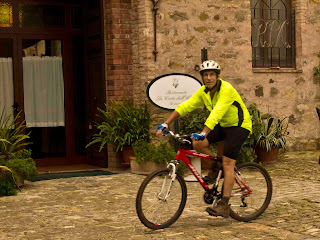 Craig doing a victory lap at the winery 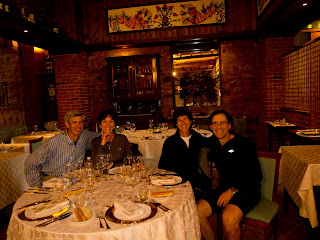 The four of us dirty and smelly in the winery restaurant 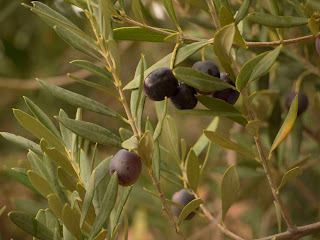 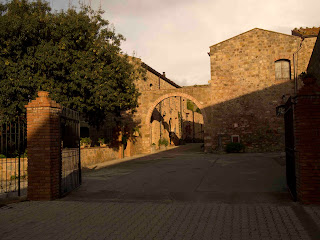 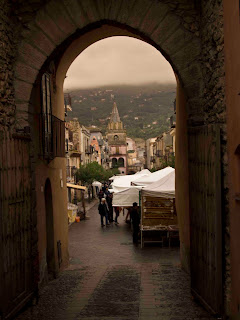 Castelbuono for pastries and pistacchio liqueur 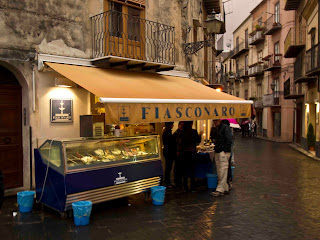 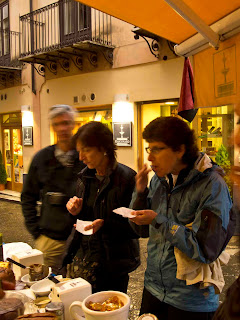 Our fears were well grounded. We got a message at breakfast from Angela telling us that cycling was off for today because the trails were flooded. She was planning on picking us up at 11 AM now to go straight to the winery for a tour, wine tasting and, yes, lunch. But when she finally arrived, she told us we might be cycling and trekking. So we were off to Castelbuono in the Modernie Mountains. When we got there, we made our way to the guide’s office where we met Mario, a twenty-something year old, built for hiking and cycling (<1% body fat). He suggested a short cycle followed by some trekking in the mountains. Sounded good, except for cycling through the narrow, crowded, cobbled streets of Castelbuono, but we were assured that this was only for a kilometer or so. So off we went. We should have realized immediately that there was going to be some REAL hill work to be done, especially as we descended, and descended, and descended. I would guess the average grade was 10-15% (about the same as my driveway). I was a bit nervous, so you could imagine how Molly, who hadn’t been on a bike in years, felt. Then the pavement ran out and we were on washed out, slick, rocky class V roads. I’m glad Jeri and I had a little mountain biking instruction in NZ, and had recently bought bikes. Even so, it was slow and scary. We were all having a bit of a tough time (except Mario), but the last straw for Molly was having to ford a small stream. She nearly made it, but slowed down just a bit too much. She tried unsuccessfully for a foot landing on a dry rock and wound up with soaked sneakers. At this point we called for the sag wagon, and Jeri and Molly took the smart way to the winery. Macho Craig and David wouldn’t give up. Boy, were we stupid. The roads we were on improved significantly, but the terrain became impossible. The hills kept coming and coming at the same grades that we descended (or worse). I’m embarrassed to tell you that Dave and I had to walk up some of these hills pushing our bikes. Even walking was difficult on these hills. We stopped at one point mid hill where Mario stopped to steal us some prickly pears. They were delicious, especially in our state.

We finally reached the winery after stopping briefly to play with a 3 foot long milk snake (Mario assured me it was not poisonous, but seemed very unhappy to be lifted by its tail by Mario). When we arrived, Jeri and Molly met us at the gate, looking a lot better than we did.

We went into the restaurant at the winery feeling a bit underdressed. It was quite a formal dining room and here I was dripping (and stinking) with sweat and my hiking boots covered in mud. Everywhere I stepped I left little clods of mud. We had a 4 course lunch with 4 wine pairings. I think Mario expected us to ride back with him, but between the wine, the food, a bit of rain, and the reverse of the terrain we just left was enough to allow Dave and me to wimp out. We said goodbye to Mario and left the bikes at the winery for someone else to retrieve. We had a brief private tour of the winery after which Angela with her dad as our driver, picked us up for the easy ride back to Castelbuono. Even the car had trouble getting up and down the hills.

When we got to Castelbuono, we found stalls being set up for a mushroom festival that would start tomorrow-too bad we’ll miss it. The weather was pretty crappy with a light misty rain and cool temps in the 50’s. We walked through the town to another famous pasticceria, Fiasconaro. One of there more well known products, a pistachio spread was taken to the moon on the Apollo mission. It was very tasty, but we preferred the almond (though not enough to buy it and schlep it home).

We left Castelbuono for the two hour drive to Terrasini, a town just outside of Palermo near the airport. When we finally got there, we were exhausted and surprised to find the accommodations a bit subpar for the quality for the rest of the trip. It was a small B&B with very sparse amenities. Dave and Molly were only spending about 6 hours here since they had to leave about 4:30 AM for their flight home. Jeri and I were able to sleep until 6.