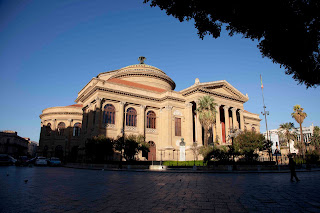 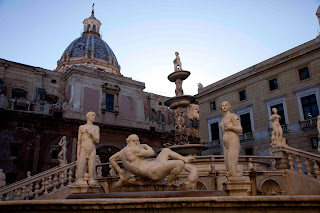 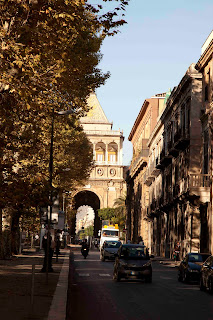 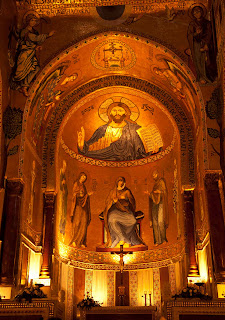 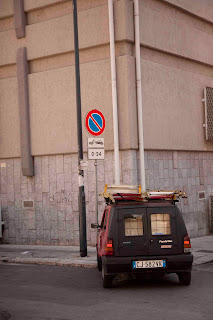 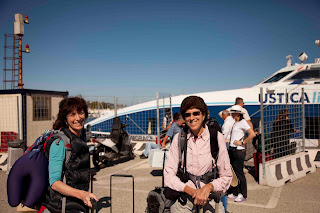 Molly and Jeri about to board the hydrofoil 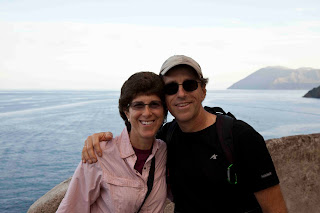 Craig and Jeri on Lipari battlements 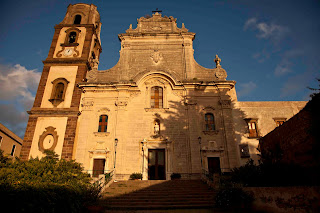 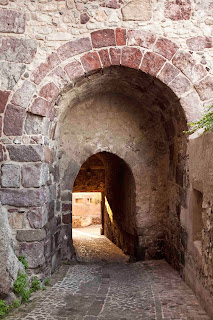 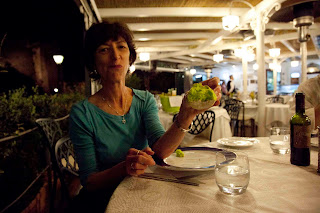 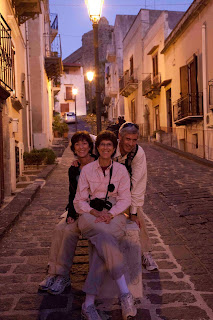 Streets of Lipari at night 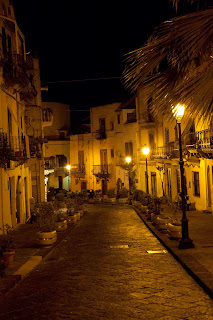 
Our last morning in Palermo. We are all excited about leaving the city behind. This morning we got up early to finish packing and to visit the last two sites in Palermo that we missed, the “Fountain of Shame” and the Capella Capolina. With our newfound extensive knowledge of the city, we were able to make a beeline to these two sites, crossing the crowded streets with reckless abandon (we have learned how to stare down the crazy drivers).

The Fontana Pretoria was designed between 1552 and 1555 for the courtyard of a Florentine villa, but was instead installed in the Piazza Pretoria in Palermo. It was known as “the Fountain of Shame” due to the depiction of nude figures with the apostles that was unacceptable to the church at that time.

From here we hightailed it to the Palazzodei Normanni, This area has always been the seat of power in Sicily, beginning with the Romans and continuing through the rule of the Moors, and the Normans. The Norman Palace became even more important with the erection of the cathedral nearby in the XII Century. Within the palace grounds lies the beautiful Capella Capolina, the chapel built in 1130 by Roger II, whose interior is one giant mosaic. There were striking similarities between this chapel and the cathedral we saw in Monreale (also built by Roger II), especially the depiction of Christ the Pantocrator (need to look that one up) in the front of the church below the copula.

Quite anachronistically, there was also an exhibition here of Christos and Jeanne Marie, a husband and wife team of artists whose art involves covering enormous objects. Some of there work included covering the Pont Neuf in Paris, the islands in Biscayne Bay, The German Parliament, the Arkansas River Canyon in Colorado, as well as various and sundry other less ambitious projects with polypropylene fabric. Very bizarre “art”.

As we walked briskly back to the hotel for an 11:30 pick-up by Giuseppe, we tried, unsuccessfully, to change a 50 euro bill. You would not believe the difficulty in changing some money in this city. Dave and Jeri were on a quest for elusive 5’s 10’s and 20’s. They tried our hotel (“sorry no change”), 2 banks (one had a very long line with one teller trying to take care of a couple getting a mortgage, and the other had computers that were down), and a credit union (“credit unions don’t change money”). Finally, a bank that could change a fifty! I wonder if this something about the European economy that we don’t already know.

At 11:30 sharp, Giuseppe was there at the hotel with a nice small bus (I guess the Fiat was tired) to take us to Messina to catch our ferry for the Aeolian Islands, Lipari, Vulcano, and Stromboli. As we left Palermo behind, I thought a few impressions would be in order. Palermo is a good base for seeing the northwestern part of Sicily. The city itself is a lot more citified than we had expected. Our expectations of Sicily was that it was all hilly and rocky, with small villages, and rugged coastline, not a big city with the worst traffic I’ve ever seen. It is also a dirty city with garbage piled on the streets, and as Dave put it, in need of a good power wash. The drive to Messina, though, was more what we expected, beautiful coastline with azure water and tiny little villages. The road cuts through the hillside via a series of long tunnels that shortens the trip considerably (probably by days).

When we left Palermo we thought we had plenty of time to make our 2:30 ferry, but at 2:15, we were still on the highway, not yet in Messina. Got there just in the nick of time to catch the hydrofoil. The trip to the islands was smooth and fast, just under one hour. Our hotel, the Tritone, overlooked the harbor, but getting there by car was another matter. Because of one-way streets, it was quite a circuitous route. Walking, we found a little later, was much quicker. The hotel was very nice, but they had turned off the AC for the season, something that we had them rectify immediately. It was 25 degrees C in the rooms (for you non-science majors, pretty friggin’ warm-77 F).While the rooms cooled down, we went exploring the metropolis of Lipari. As we walked down to the main street, Corso Vittorio Emanuelle, we stopped at a fruit stand to get a healthy snack to compensate for all the gelato and cookies we had eaten and were about to eat. They had persimmons, and after everyone’s excitement over dessert at the olive oil farm, we decided to try them out. Persimmons are delicious, but VERY messy.
Vitorio Emmanuelle is a narrow, mostly pedestrian street full of shops, bakeries, and gelaterias. We scoped out a gelateria recommended by an old man in one of the other shops. I think he was in cahoots with the owner, because there was one right next door, and several others prior to “his” shop. Dave and Jeri had to sample all of their chocolate gelatos. Unbeknownst to me, Jeri’s had some hazelnuts in it, and fortunately, I only had a spoonful.
We wandered up to the Old Castle built by the Spanish in the late XVI Century. This was in response to pirate raids . The Old Cathedral was built by the Norman’s in the XI Century, but was destroyed by pirates in 1544. As we left the castle, we stumbled on a restaurant that had been recommended by the person at the front desk of our hotel. We were told that it was by far the best restaurant on the island. Little did we know that the man who started the restaurant then bought 4 hotels and the fishing boats in the harbor. He basically has a wrap on the whole island. What a racket! Dinner was good, not great, but the waiter spoke English very well (lived in London for several years) and was very engaging. The highlight of the meal was the green pistachio rolls (he told us they were either pistachio rolls or very, very old) and the pistachio ricotta dessert. We then walked off dinner through town and returned to the hotel for a good night’s rest.
Posted by Craig at 12:29 AM