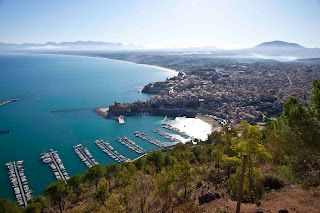 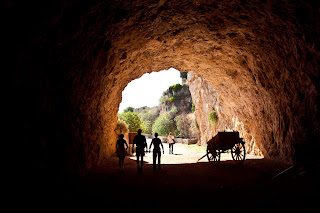 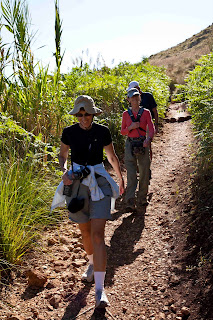 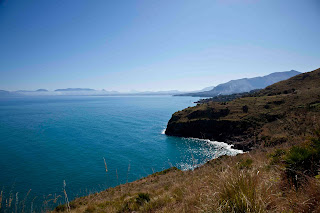 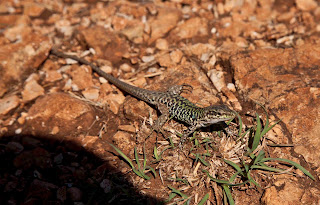 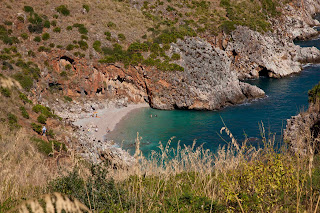 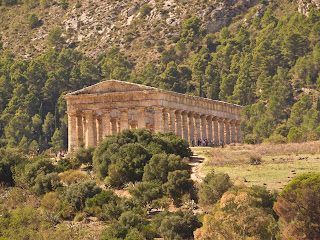 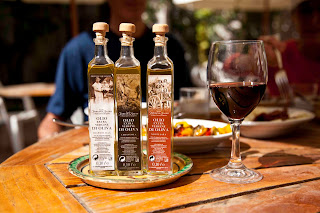 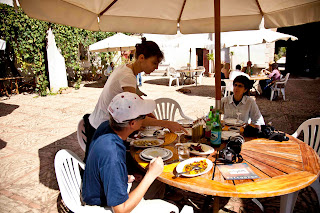 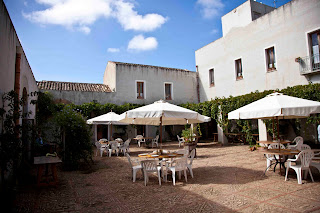 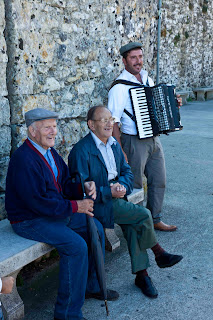 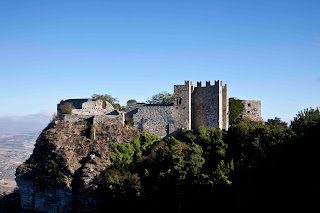 Views from the town 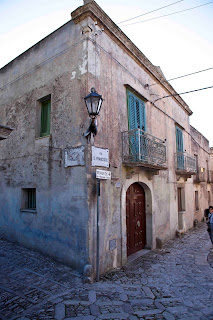 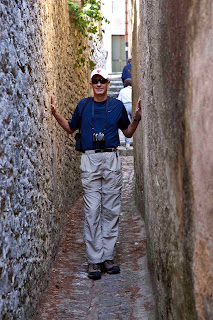 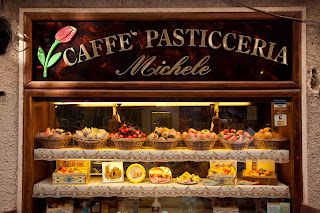 
This morning we picked up Salvatore and headed west toward Erice. Our first stop, though, was the Zingaro Nature Preserve, a large park bordering the Tyrrhenian Sea. The preserve has many miles of trails that skirt the rugged coastline and climb into the forest high above the water. We had only enough time for a short hike, but the views of the inlets along the coast were beautiful. We did not see a lot of wildlife, with the exception of a small lizard that was kind enough to pose for me. It was nice to get to stretch our legs with an easy hike before our night climb of Stromboli in a few days.

After leaving the preserve, we drove through the countryside to the Aziendo Fontansalsa di Maria Caterina Burgarella, an estate that produces fine extra virgin cold press olive oil. On the way we were able to get a glimpse of the Greek Temple of Segesta, a beautiful example of Greek architecture that has maintained its integrity to this day from the 2500 years ago.

As we approached the estate, we were surrounded by olive trees, 10,000 square meters of them to be exact. We were greeted by Angela, one of the workers on the estate. We found out that most females in Sicily were named Angela (the Sicilian equivalent of Dr. Seuss’s “Too Many Daves”). We were given a short course in olive oil production. A few interesting facts that we learned were 1. Extra virgin olive oil means that the grapes are picked early and are pressed once, only, 2. Cold pressing is done to produce better flavored oil, 3. Cheap olive oil is made from the “sansa”, the pits and skin that are removed at the initial pressing. 4. Olive oil mixed with water from processing requires that the initial press is centrifuged to separate out the water. The resultant oil is then bottled and shipped around the world.

Next was time for olive oil tasting followed by a six-course lunch. We started with several antipastos including an eggplant and almond dish, zucchini, sun-dried tomatoes, fried peppers, fresh olives, and fritatta. This was followed by a type of Sicilian pasta, busiate (curly like fusili, but long like spaghetti)with a light sauce of fresh tomatoes, garlic, almonds, basil, olive oil. By now we were stuffed, but there was more to come. The next course was two veal dishes and salad (we all could have omitted this) and then we ended with persimmons with pistachios for dessert. Neither Jeri, Dave, nor Molly had ever had persimmons and after a bit of skepticism became big fans. Stuffed and happy, we piled back into our Fiat for the trip to the next venue, the medieval walled town of Erice.

Erice is perched atop Monte San Giuliano at the northwest corner of Sicily. The town was probably started by the ancient cult of the goddess of fertility, Venus Erycina. It has maintained its character with narrow stone streets and alleys just barely wide enough for Dave, city walls, and many churches. The highlight, though, was the Ancien Patisserie, a bakery that puts Mike’s of Boston’s North End to shame. We are going to have to do a lot of dieting and exercise after this trip! In addition to the beautiful medieval village, there is great cell service thanks to the numerous cell towers just outside the city walls. It’s hard to condone this type of city planning.

It was then back into the" fix it again Tony" (Fiat) for the 1 ½ hr, ride back topalermo for packing and dinner(??).