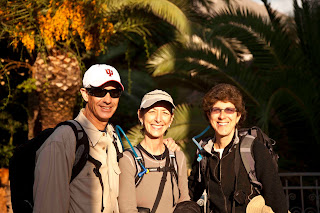 David, Molly, and Jeri in the sun finally 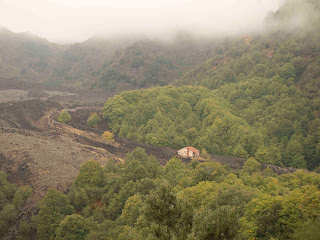 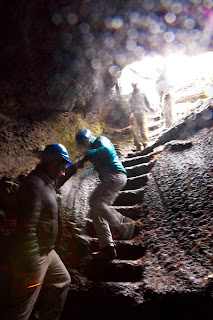 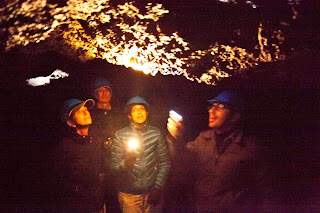 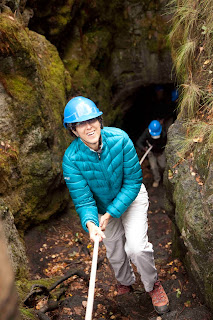 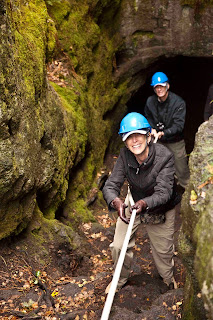 Molly ascending from the cave 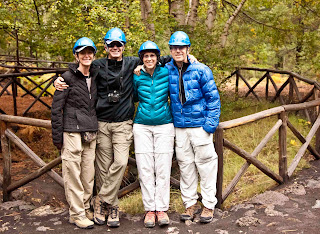 The group in our helmets 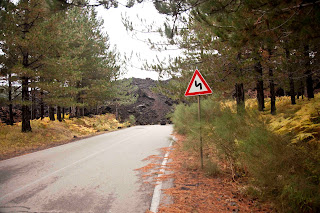 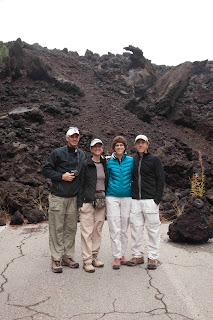 David, Molly, Jeri, and Craig at the lava edge 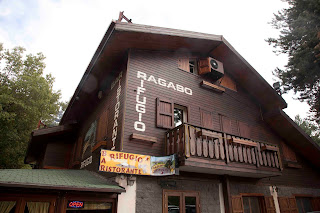 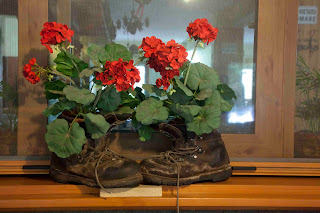 Planter in the Rifugio 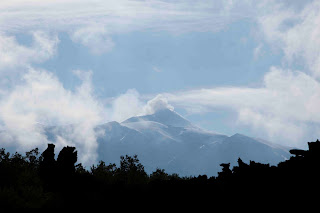 Finally get a glimpse of Mount Etna 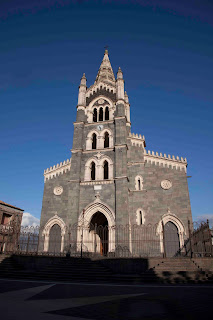 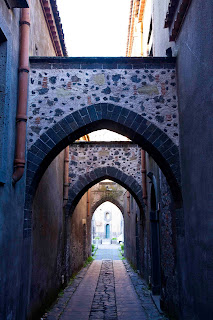 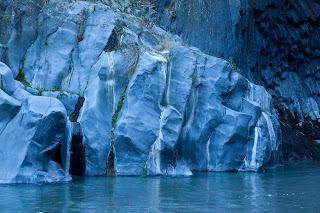 Basalt wall in the Alcantara Ravine 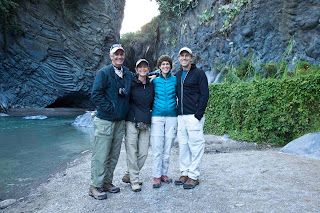 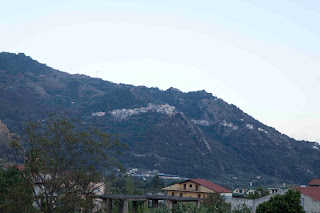 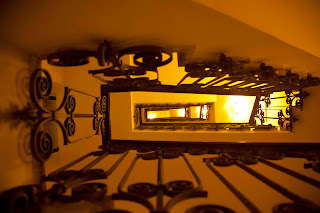 Five flights to our room 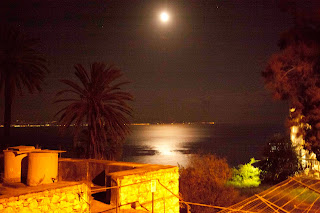 
This morning was spectacular with sun and bright blue skies. After a nice breakfast overlooking the ocean, we met our guide for the day, Antonello. We were surprised by our vehicle, a Range Rover, not our usual Fiat. Antonello was also a surprisingly good driver (learned in Germany), and very pleasant and informative. Unfortunately, as our elevation increased the fog did as well. By the time we were at 1500 meters, we were completely socked in. We began a short hike to three extinct volcano craters, the Sartorius Mounts. After this, we did some four-wheeling and eventually came to a part of the old mountain road that was cut off by lava from the major eruption or 2002. This flow also wiped out the visitors center and a hotel. The lava fields along with the fog gave the landscape an eerie look that made us feel as if we were on the moon.

Our next stop was a crawl through a cave formed by a lava tube. It was formed by the outer lava crust cooling while the hot lava inside continued to flow. These types of caves were used for ice production prior to refrigeration. People would fill the caves with snow during the winter and allowed it to freeze solid. Blocks of ice were then cut and hauled down the mountain to the ports where it was used to refrigerate the fish that was caught. As we descended into the cave, we found out why we were wearing helmets. Each of us in turn smacked our heads on the low ceiling in the dark cavern. At the other end of the tube, the ascent was vey steep and we were fortunate to have another group with a climbing rope coming down as we went up. This made for a much more rapid and less dangerous ascent.

Lunch was a 5 course meal including antipasto, pasta, meat, salad, and of course, dessert and a lot of wine. I can’t ever remember drinking at 2 in the afternoon, and now I know why I hadn’t. Within Randazzo is the town closest to the Mt Etna craters, but it has never been damaged by lava. The town has over 100 churches (with about 7,000 inhabitants) the major one of which is the Santa Maria Basilica built between 1217 and 1239. The church is adorned with huge dark paintings lining the walls depicting horrific events. I suppose little kids must have nightmares after going to church. Many of the side streets are good examples of medieval architecture, the most prominent being the Via degli Archi, pointed arches with black cobblestones.

Our final stop of the day was a the Alcantara Gorge, a 60 ft deep ravine cut out of black basalt by the Alcantara River. The gorge sits below the town of Motta Camastra, a medieval town that was prominent in the Godfather movies.

When we returned to the hotel, we had to move our bags to our new rooms. Dave and Molly’s were on the same floor as last night, but we were on Floor 4 which is actually 5 ½ flights of stairs. After moving the bags (of which Dave did the lion’s share), we were ready for a nap. Next time we stay at a hotel, there has to be an elevator! We’re getting to old for this.

In the evening, we spent time exploring the streets and alleys of Taormina, stopping for a light dinner at a small out of the way restaurant. Dave made a valiant effort to ask the waitress for the check in Italian with my prompting, but he asked for “il canto” instead of “il conto”, so the waitress started singing to him then laughed hysterically. We all got a good chuckle out of this.

Tomorrow we meet Paolo, our guide for the next three days.