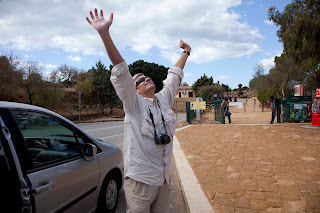 Dave after a hard morning in the Fiat 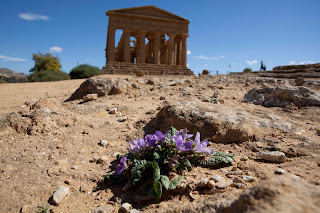 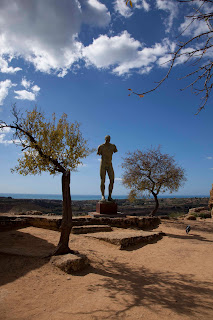 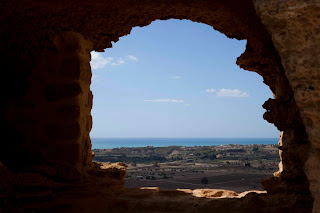 View through a burial tomb 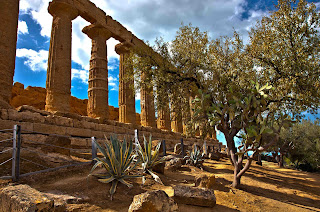 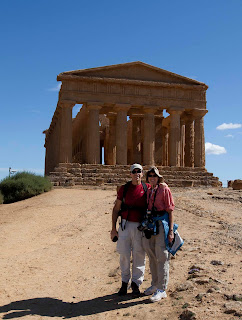 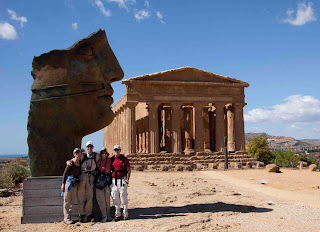 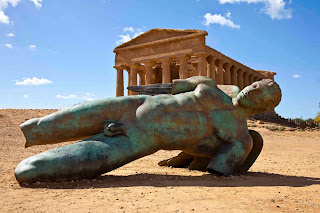 Temple of Concordia with statue of Icarus 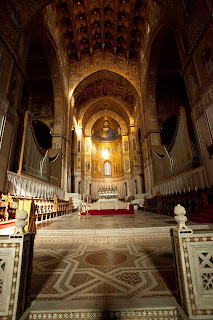 
We slept like rocks last night leading to a mad dash to get out on time. After a quick but nutritious (lots of croissants) breakfast, we met our driver who didn’t speak a word of English. With my rudimentary command of the Italian language, we carried out a lively conversation of which there is a draft with translation below.

Me: “Quant e lontano a Agrigento?”

For the balance of the trip he was silent. I guess driving like a madman requires intense concentration.

Upon arrival in Agrigento, we met our tour guide, Enzo. Enzo was born in Sicily, moved to the U.S. when he was younger and opened up an Italian restaurant in New Jersey. He and his wife and 3 children moved back to Sicily when his wife developed severe allergies which seemed to be fine while in Sicily. He was a great guide: a wealth of knowledge and very animated, punctuating his history with personal stories and little known factoids. Agrigento was a very important city in early years due to it’s strategic position guarded from the north by the Tyrrhenian Sea and from the south, a narrow river passage between two mountains in the East and West. The area was very fertile, producing olives and almonds. It was conquered by a veritable whose who of conquerors, the Phoenicians, the Greeks, the Romans, the Carthaginians, the Visigoths, the Normans, the Moors, the Byzantines, and probably a few others that I have forgotten (should have paid more attention to Mrs. Kahn in 4th grade Ancient History class). The ruins here primarily date back to the early Greek and Roman periods. Of particular interest were the Temple of Concordia and the Temple of Zeus. The Temple of Concordia is the best preserved Greek Temple in the world. When the Carthaginians sacked Agrigento, they needed a temple for there own religion, so this one was spared. It was later converted to a Christian church after the Norman conquest. It continued as a church until the late 18th Century. The Temple of Zeus, though in ruins, was one of the 7 Wonders of the World. It was an enormous temple, the size of a couple of football fields. The columns were around 100 ft high. Throughout the Valley of the Temples there were modern sculptures by Igor Mitoraj of Icarus, Daedulus, and other Greek and Roman mythological figures.

We were enjoying Enzo and the Valley of the Temples so much, his 1-2 hour tour became 3 hours, which was going to make it tight to get back to Palermo for our visit to Monreale, but Enzo assured us we had time for a little lunch at a place he knew. We drove a short distance to the Nobel Ristorante where after a few short words from Enzo, and we had pizza and a plate of penne con pesto e gamberetti, perhaps the best pasta dish any of us had ever eaten (and the pizza was amazing as well). Full and tired, we crammed back into our Fiat minivan (made for much shorter people) for our return trip. Since we knew how long it took to get there, we didn’t have much to say to our driver, so we all got some shut eye.

We finally got back to Palermo around 4:30 instead of 3;30 as planned, and met Salvatore, our guide for Monreale as well as for tomorrow morning’s touring. Monreale is a small town at the top of a 2500 ft mountain that commands a view of Palermo and the ocean. A cathedral was built there by King Roger II of Sicily by one of the Norman kings. The cathedral was built in only 26 years and utilized labor from many different cultures making it unlike any other Cathedral of it’s day. In particular, there is a lot of Moorish influence with beautiful mosaic tiling throughout.

We descended from Monreale into the horrendous traffic of Palermo at rush hour. Since we had seen most of what Palermo had to offer yesterday on our walk about, our guide drove us around a bit and then had us dropped us off at the hotel. We said arrivederci to our driver, Chatty Cathy, and made plans with Salvatore to leave the hotel at 8 tomorrow to start the day with a hike followed by a tour of Eriche, a medieval town on the northwest coast.