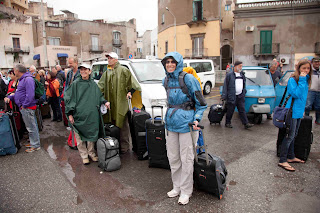 Waiting for the ferry in the rain 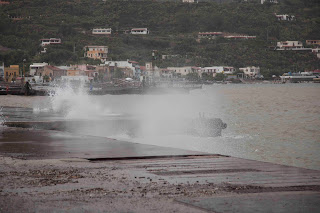 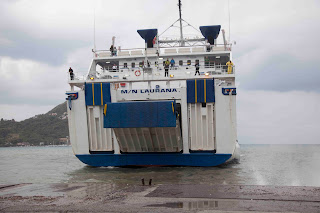 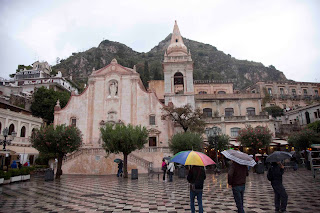 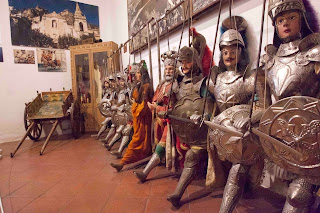 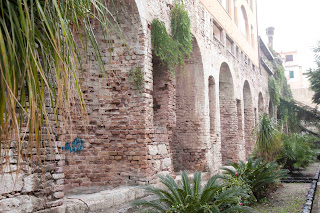 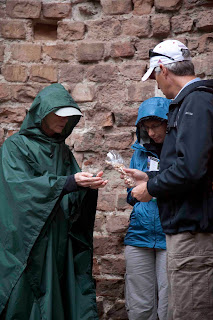 Lunch of pistachios and fruit 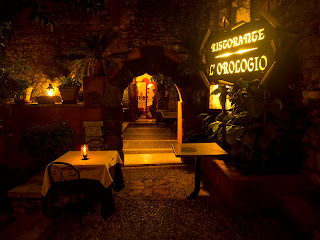 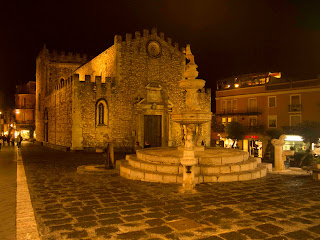 
It was pretty obvious when we woke up that our plans to see Stromboli active at night would not come to fruition. The rain was impressive and there were doubts as to whether any boats would venture out today at all. After breakfast while we were trying to decide on a plan of action, the people at the front desk informed us that there was a ferry- the one and only that would be there today, that left at 10:20, and the hotel would get us to the ferry dock if we could leave by 10. It was now 9:30. We skipped showers and did some speed packing and got to the front desk at 10. At the ferry dock, the waves were crashing into the jetty and sending plumes of spray 8-10 feet in the air. I had my doubts as to whether docking here was going to be feasible. We bought our tickets and waited…and waited….and waited….More and more people arrived at the dock (I wondered why we didn’t get the memo about the lateness of the ship). The person kept giving updates every 20 minutes, “It will be here in venti minutos. Finally at around 11:45 the ship arrived and docked rather easily. This was not the hydrofoil that we arrived on but a craft the size of a small cruise ship. It had cabins, food stands, and even a pool. But there was no lifeboat drill or safety briefing, and all we could think about were the ferry accidents you read about in the papers at home. “What were those idiots thinking going out in weather like that”. Our cruise ship actually plowed through the heavy weather just fine and although it took more than twice as long as the hydrofoil, we made it to Milazzo in one piece (and dry!).

After feeling like we dodged a bullet on the ship, little did we know that the next leg of our adventure would be the most dangerous. Angela had arranged a driver for us to take us from the Port of Milazzo to Taormina where we would spend the next three nights. We had no idea that Mario Andretti was working in Milazzo. As the minivan approached 150 kph (roughly 93mph) we began to squirm in our seats. Speed limits maxed out at 110 and were often 60kph when he was doing 130. He was extremely aggressive, climbing onto the car in front’s tail until the car would move over. To make matters worse, Molly’s seatbelt wasn’t functional, and the driver was playing awful dance music very loudly. We all breathed a sigh of relief when we reached our hotel.

The hotel was a very pretty B&B, la Penionne Svizzera, but there was no elevator. We knew about this, but though we were on the 2nd floor. Unfortunately we were on the 1st and 3rd floors the first night, and 2nd and 4th the other two nights. A lot of bag schlepping. Thank God for our muscle (Dave), since I can’t really lift much weight because of my hips. I made sure to give a big tip.

We spent the rest of the afternoon walking through the old town of Taormino. Our hotel was just outside of the Messina Gate at one end, and we walked to the other end (the Catania Gate). Taormina dates back to the ancient Greek occupation of Sicily and many of its structures are from the Middle Ages. Dinner was at a typical Sicilian trattoria. There was an antipasto buffet followed pasta that each of us chose. They definitely know how to make their pasta here.

When we got back to the hotel, one of the resident cats found its way into our room. For the next half hour we tried to coax it out. At one point it ran onto our balcony and disappeared only to return 15 minutes later. I finally used brains over brawn, and got him out of our room so we could get a good night’s rest. Weather permitting, we will climb Mt. Etna tomorrow morning.